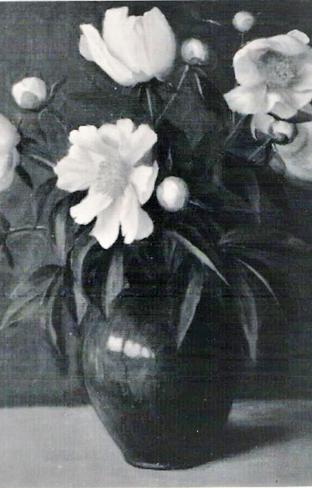 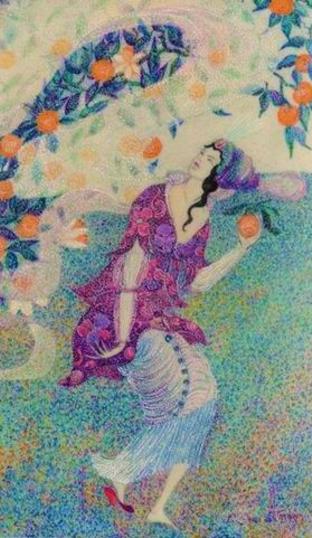 Georg's Aunt
Minna Wepler (his mother's sister) was from the Duchy of Hesse, German Confederation (today Hesse, Germany*). She attended the Liszt Music Conservatory  in Weimar, Thuringia, Germany and became a professional pianist; her name and performances appeared in the newspapers.

Study for Schubert at the piano 1898 by Gustav Klimt

​Bern, Switzerland and held a career in the Kingdom of Prussia as a painter and sculptor, as well as the Professor and Director of the painting classes at the Art Academy in Kassel, Duchy of Hesse* (today Germany).

Georg's Sister
Hede von Trapp (1877-1947) was born in Pola on the Adriatic Coast, Austro-Hungarian Empire (today Pula, Croatia). She was an Austrian poet, painter, and graphic designer of the Art Nouveau movement. She studied in the master class of the Berlin painter Erich Ludwig Stahl and is considered an autodidact. After 1884, she lived in Graz, Austria. Around 1896, Hede graduated with a teaching degree from the ‘Officer’s Daughters Institute of Education’ in Vienna. She never became a teacher, instead, she focused on writing and illustrating her own work, later she also created and designed jewelry. According to the 1913 magazine The International Studio (Volume 49), "In Hede von Trapp, Austria can claim an artist of distinction and decided talent... A fine feeling for color is indeed one of the distinctive traits of her. She is always seeking new methods of expressions and relies solely on her natural imagination instincts, which are unhemmed by conventionalities." Her mediums included working in gouache, watercolor, charcoal pencil, pen, on parchment, silk, grey Japanese paper, cardboard, etc. Many of her themes depicted fantasy and mythology. Hede's poems and artwork were published in books and shown at exhibitions. Her works are in, among others, the Museum for Applied Art, Vienna, the Austrian National Library, Vienna, the Kunstbibliothek, Berlin, and the Gutenberg-Museum, Mainz, Germany. She lived her last years in Korneuburg, Austria where today there is the street "Hede-von-Trapp-Straße" (Hede von Trapp Street) named after her. In 2017, the Museum of Fine Art in Korneuburg, Austria hosted a retrospective of Hede's work for several months.

Clementine Emilie Nahl (1783–1832) was from Kassel, Duchy of Hesse (today in Germany*). In her youth, she aspired to be a singer; however, after her marriage, she pursued art and poetry and was known for her wit. She came from the artistic dynasty 'Nahl Family', dating back to the 1600s in a long line of artists and craftsmen. Her nephew was Carl Christian Heinrich Nahl who immigrated to the United States and made a name for himself in California.  Her father was Johann August Nahl The Younger (1752-1825), born in Clanne bei

Georg's Great-grandfather
Baron August Konrad von Hofmann 1776–1841 was born in Nidda, Landgraviate of Hesse (today Nidda, Germany). Although his career was Finance Minister of Hesse and the State-Advisor to the Archduke of Hesse, one of his passions was music.  He was an enthusiastic amateur pianist and tutored by Carl Maria von Weber, who is considered one of the first significant composers of the Romantic school. August Konrad's love of music extended to co-founding the Darmstadt Orchestra in 1832, which is still in existence today. 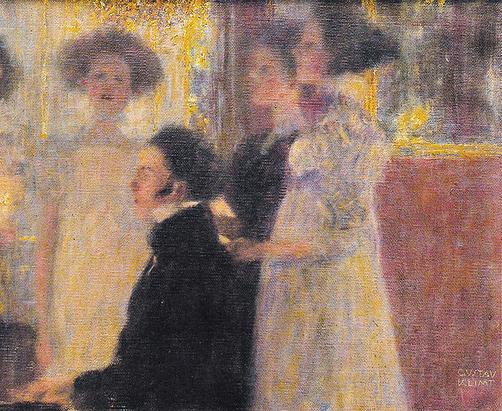 composed, provided entertainment and tutored their daughters Marie and Karoline in the piano, "four-hand" playing, and singing. Staying with the Esterházys allowed Schubert the freedom to compose several compositions both for the family as well as, for his personal repertoire including "four-hand" piano style (two people playing on the same piano together). Although unsubstantiated, it was later speculated that perhaps Schubert had an unrequited love for Karoline. Outside his tutoring, their paths did cross in Viennese social circles. A few months before his death between January and April 1828, he dedicated the song "Fantasy in F minor" to her. Seventy years later, when the Austrian artist Gustav Klimt was commissioned, by industrialist Nikolaus Dumba, to paint Dumba's music room in Vienna, it is believed that Klimt's subject matter of Schubert was at the Esterházy home in Zseliz, surrounded by the Countesses. 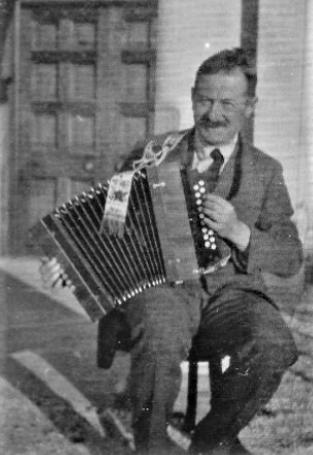 *The unification of Germany was in 1871

Georg von Trapp (1880-1947) was born in Zara, Dalmatia on the Adriatic Coast, Austro-Hungarian Empire (today Zadar, Croatia). Georg loved to make music and sing, inspired by his parents during childhood. As a young man, attending the Maritime-Academy at Fiume (today Rijeka, Croatia), he took violin lessons as part of the naval academy curriculum. Georg became proficient in playing the violin/fiddle, guitar, mandolin, harmonica, and accordion. During his naval career, he enriched his musical repertoire with many folk songs from across the multi-ethnic Empire; he passed these songs on to his children whom he personally taught and sang with. He instructed his children Rupert and Maria in the accordion, Agathe in the guitar, and Johanna in the violin. Georg also afforded all his children formal music lessons, for example, Hedwig and Martina learned the piano, Johanna learned the piano and violin, and Werner learned the cello and clarinet. Georg and his children formed a small family 'Schrammel Quartett' (a style of Viennese folk music) consisting of Georg as first violin, Johanna as second violin, Rupert or Maria on accordion, and Agathe on guitar. The entire family loved making music together daily.

August von Trapp (1836-1884) and Hedwig Wepler (1855-1911), originally from the Duchy of Hesse (today Hesse, Germany), migrated to the Adriatic Coast to follow August's Austrian naval career in the Austrian Navy. They both were passionate about music and arts, creating a family life filled with piano playing and singing. August had musical auditory memory, whereby he could attend the Opera and then later delight his family by replaying the new tunes from memory on their piano. His mother created folk art and in her family, each sibling was musically trained and often played together with family & friends.

John Whitehead (1854-1902) and Countess Agathe Gobertina von Breunner (1856-1945) lived in Fiume on the Adriatic Coast, Austro-Hungarian Empire (today Rijeka, Croatia), but were British and Austro-Hungarian respectively. They instilled a love for music and arts in their children. John created beautiful, accurate technical engineering drawings and carved wood as a hobby. Countess Agathe was multi-talented as an amateur artist, architect/designer and gifted musician playing the piano and sang. Her father, August von Breunner had been an amateur actor, artist, and author, who encouraged the arts within his family as well.

Marie Esterházy (1802-1837) was born to Hungarian Count János Esterházy and Countess Roza Festetics (1784-1854). For two seasons, the Esterházy were patrons to the composer Franz Schubert. He spent many months in 1818 and 1824 with the family at their summer home in Zseliz, Austrian Empire (today Želiezovce, Slovakia). While there, he

Agathe Gobertina Whitehead (1891-1922) was born in Fiume on the Adriatic Coast, Austro-Hungarian Empire (today Rijeka, Croatia). As a child, as was the custom, Agathe received formal music training with piano and violin lessons. She was also very close to her mother, who was a talented amateur artist and pianist. Together they made music and sang regularly. By the time Agathe was a teenager, her mother and her often performed together to entertain family, friends, and guests ranging from small to large events. On such an occasion, Agathe met Georg for the first time.

Joan Whitehead (1899-1985) was born in Fiume on the Adriatic Coast, Austro-Hungarian Empire (today Rijeka, Croatia). Joan’s artistic talent showed itself early on in her life. Supported by her mother who was an amateur painter in her own right, she was encouraged to pursue her passion. In 1921, she was accepted to the “Akademie der bildenden Künste” (Academy of the Arts) in Vienna, Austria. Out of 12 female applicants, only four were chosen. Her talent was acknowledged by the academy through a panel of artists and dignitaries from the Ministry of Culture, who observed her drawing in their presence over the course of two days. This combined with her portfolio of past work, granted her admission. Equally impressive was that typical applicants took 12 Months of preparatory schooling to develop their portfolio, whereas Joan only had three months to prepare. Following her graduation from the Academy, she moved to Switzerland, built a house with studio and concentrated on her art. Her work encompassed, still-lifes, portraits, nature scenes, nudes, and landscape sketches drawn on her travels through Switzerland and Europe. She worked in pencil, color pencil, watercolor, oils, and charcoal.

A Long Tradition...
Georg and Agathe came from a long line of artistic families, were both musically talented, and passed down a love of music to their seven children.