As appointed High Commissioner, István supervised the Danube navigation project and the building of the Chain bridge uniting Buda and Pest.  His contemporary, Lajos Kossuth and he came at the issue of Hungarian reform from opposite sides. Lajos warned against attempting to exclude wider social movements from political life and supported democracy. He rejected the primacy of elites and the government and labeled István a liberal elitist aristocrat, while István considered Lajos to be a democrat who was a political agitator and fomenting revolution, which he wanted to avoid. István was a leader in the 1848 Hungarian rebellion and imprisoned by the Habsburg Empire. While there, he was forced to witness "cold-blooded butchery of hundreds of his countrymen" including other leaders who had been falsely promised amnesty. Suffering a nervous break down, his doctor ordered him to spend time at a private hospital within his own suite, in Vienna. Having spent himself in his efforts for his country, he never returned to politics. He wrote two books: Önismeret (Self- awareness) about children, education, and pedagogy and Ein Blick (A Glance), a study of the deep political problems of Hungary at the beginning of the 1850s. In response to the interior minister Alexander Bach’s pamphlet the Rückblick auf die jüngste Entwicklungsperiode Ungarns (A retrospective glance at the most recent developmental phase of Hungary), István published a counter pamphlet Ein Blick auf den Anonymen "Rückblick" (A glance at the anonymous "retrospective" glance). István was harassed with the threats of jail and lawsuits by the Habsburg imperial gendarmes within his apartment at the hospital. The official Habsburg accounts state, overcome with anxiety, the tragic result was that on April 8, 1860, Count István Széchenyi at 69 years of age took his own life with a pistol shot to the head. All Hungary mourned his death. István was buried with great honors; his funeral was attended by 80,000 people. His death became a lasting symbol for the struggle of Hungary's national independence.

Erdödy was from Hungarian heritage 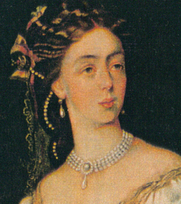 **At the time, Regensburg was free city under the Holy Roman Empire

Austria has existed in many forms from 927–present. From 1526–1804, it was ruled by the Habsburg Monarchy. From 1804–1867, it was known as the Austrian Empire and then the Austro-Hungarian Empire from 1867–1918. Within its territory during this time, the free state and city of Fiume existed (today Rijeka, Croatia). At the end of WWI, their monarchy dissolved and a large portion of their territories lost. Between 1918 and 1919, the remaining area became part of the Republic of German-Austria. In 1919 the First Austrian Republic was established, which was 1/5th of its original size. From 1938-1945, Austria was annexed by Germany. After WWII, it was Allied-occupied Austria for almost 10 years. In 1955 the modern Republic of Austria was established.

Regensburg's first settlements were Stone Age. The Celtic's named it Radasbona. Around AD 90, the Romans built a fort there. In the 6th century, it formed a Duchy in Bavaria through the Holy Roman Empire and became an independent kingdom from 1245-1803. The city then lost its status as a free city, following its incorporation into the Principality of Regensburg. When Napoleon abolished the Holy Roman Empire, Bavaria became a kingdom in 1806 due, in part, to the Confederation of the Rhine. It incorporated into the German Empire from 1874–1918 and finally became a state of the Federal Republic of Germany in 1871. Today, Regensburg is the fourth-largest city in the Bavaria, Germany. 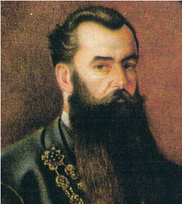 Honoring Agathe's Maternal Side, Great to 3x-Great-grandparents to the von Trapp Children

3x-Great-grandparents to the von Trapp children

2x-Great-grandparents to the von Trapp children 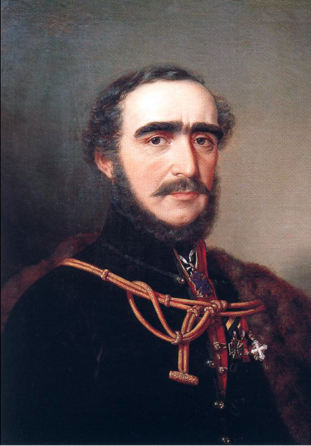 A Free City of Holy

Esterházy was from Hungarian heritage

Great-grandparents to the von Trapp children

4x-Great-uncle to the von Trapp children

Count István Széchenyi de Sárvár-Felsővidék is considered the greatest statesman in his nation’s history and known as “the Greatest Hungarian”, a title given to him upon his death by fellow Hungarian politician, Lajos Kossuth. He was born to Count Ferenc Széchényi de Sárvár-Felsővidék and Countess Juliána Festetics de Tolna as their youngest of six children. His father, an enlightened nobleman, established the Hungarian National Library and Hungarian National Museum by donating the family’s priceless collection of books, images, maps, coat of arms, signet, and medal collection. István’s formative years were spent in Austria and Hungary. He participated in the Napoleonic Wars, fighting with distinction. As first lieutenant, in 1826, he retired and turned towards a political career. After extensive travel in Europe and England, he hoped to bring the modernization he had witnessed back to Hungary. The growing gap between the modern and agrarian world of his homeland spurred him to become a reformer and promote development. Like his father, he endowed the Hungarian people by establishing the Hungarian Academy of Arts and Sciences by donating one years annual income from his estates. His efforts were to promote Hungarian as the national language, form a forum for the reform movement, and publish his ideas in a series of political writings. Thus, he encouraged the Hungarian nobility to modernize within the framework of the Habsburg Monarchy to be able to segue into a gradual economic, social, and cultural development. He feared radical socialism as divisive to a country with so many languages and ethnicities.

Career: Count of Grafenegg Castle, August inherited the family estates. His duties were that of landowner and manager of the lands of Grafenegg, Neuaigen, and Asparn on the Zaya. He was an accomplished artist, gifted in the fine arts, very musical, and had a special love for the performing arts. His book on Landsknecht Woodcuts, showing the costumes worn by medieval footsoldiers and pikemen for hire, was published in 1883 and remains the most comprehensive collection of 16th-century woodcut art depicting the local area dress and heraldry of the day. In his later years, he documented and painted intricate heraldic coat of arms.

von Breunner-Enkevoerth
1796-1877 (m. 1827)
Born: Imperial City of Regensburg, under the Holy Roman Empire (today Regensburg, Germany)
Career: Court Chamber Secretary, Court Council and Ministerial Council for the Court Chamber and Ministers of Land, Culture, and Mining for the Habsburg Monarchy, Chairman of the Security Committee in Vienna, member of the House of Representatives and the Diet of Lower Austria, Count of Grafenegg, and amateur paleontologist